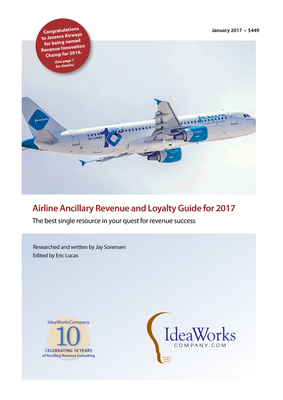 The airline industry's best single resource in the quest for revenue success.  The latest Guide from IdeaWorksCompany!  Issued February 2017.

Throughout 2016, the team at IdeaWorksCompany researched the top ancillary revenue producing airlines and the most generous frequent flier programs, and issued reports that described the industry’s service innovation and product development; as well as offering practical advice for airline management teams.  The culmination of this work is the 2017 Airline Ancillary Revenue and Loyalty Guide. The 2720-page Guide includes every published report and survey issued by IdeaWorksCompany during the year and is comprised of four sections: 1) an abbreviated version of the Worldwide Report of Reward Availability from 2016, 2) the full collection of four research papers from IdeaWorksCompany, 3) the complete Worldwide Report of Ancillary Revenue based upon 2015 airline financial disclosures, and 4) detailed results from the 2016 Switchfly Hotel Reward Payback Survey.